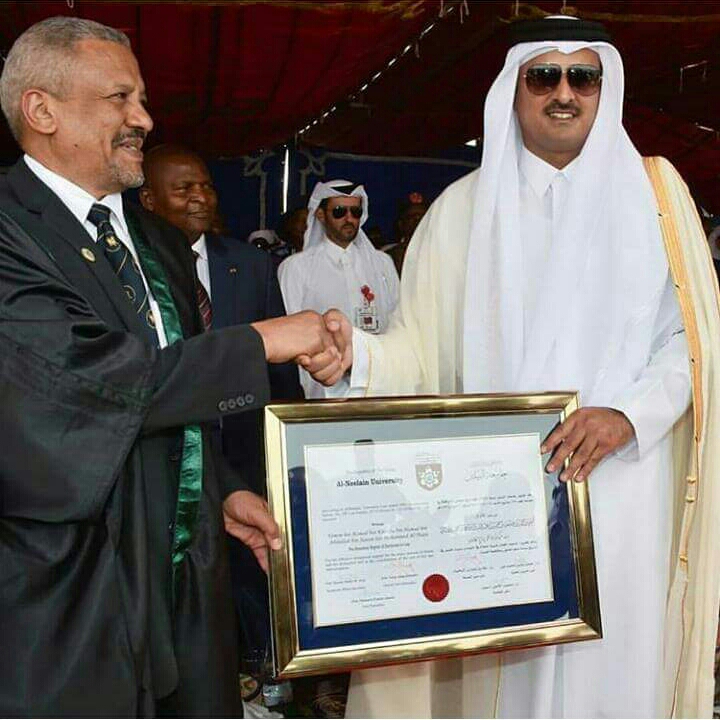 on his 95th meeting, which was held on July 17, 2016, Al-Neelain University Senate Awarded HH Emir of Qatar, Sheikh Tamim Bin Hamad Al Thani an Honorary Doctorate in law, in appreciation of HH the Emir's support for the peace march in Sudan, his role in combating corruption and strengthening the rule of law, and in recognition of his efforts in Qatar's sponsorship of the Doha Document for Peace in Darfur that consolidated the foundations of security, stability and peace in the region.

Professor Mohamed Elamin Ahmed, Vice-Chancellor of Al-Neelain University and chairman of the board of professors, handed the degree to HH the Emir of Qatar during the celebration of completing the implementation of the Doha Document for Peace in Darfur, which took place in Al-Fashir in the Sudanese state of North Darfur. HH the Emir of Qatar received congratulations from the presidents: His Excellency the President of the Republic of Sudan Omar al-Bashir, the President of Chad and the President of the Republic of Central Africa, who attended the event.